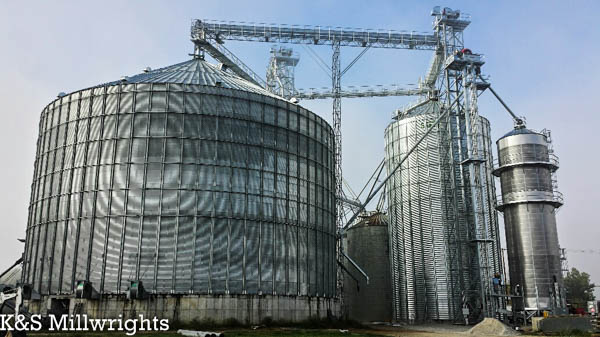 After 40 years of making stirring machines and augers for the inside of grain bins, Sukup Manufacturing started building their own grain bins in 2001, completing their product line that already included grain storage, handling, and drying equipment. The result is the world's most advanced grain bin. Sukup Grain bins have a number of features that differentiate them from the other grain bins on the market. Among these:

- Extra Strong Farm Roof - Sukup's 15' - 48' diameter grain bins are designed with a peak load rating of 5000 lb. An optional 8000 lb. roof is available on the 42' and 48' bins. With a standard double tap roof clip, sheets are supported every 9 3/8" at the eave. Even more strength can be added with additional continuous eave clips.

- Cutting Edge Production Equipment - Sukup's sidewalls start out as coils of flat steel. Their machinces punch the bolt holes, then form the corrugations, and create the curve, all to tight tolerances. After all this, a coating of oil is added to the steel to help prevent white rust.

- Extra Large, Extra Strong Fill Holes - The fill holes on Sukup's grain bins are 38" round, which provides 8 square feet of exhaust area. The cap on the fill hole is double domed, and mounted on steel rods, allowing it to slide open and closed, preventing it from being thrown around in the wind. An optional remote lid allows you to open the fill hole cap from the ground. Also, a 60" octagonal diamond lid may be added in place of the domed lid.

- Larger Manholes - Sukup grain bins have the largest manholes in the opening, a whopping 20" by 30.5", with over 5 square feet of exhaust area. The Sukup manhole covers have special latches that keep it firmly in place, and can be easily released from the ladder side. The cover lays flat against the roof, eliminating the mess of water and soggy fines, and a formed lip and rubber gasket keep snow and rain out of the grain bin.

- Sukup Roof Vents - Sukup's exclusive 18" roof vents are practically indestructible, and are specially designed to release moisture from the bin while also protecting the bin roof. Sukup's vents sit higher on the roof, allowing more moisture to leave the bin during drying, and the pre-punched vent holes create an extra tall extruded lip that acts as a barrier to prevent moisture from leaking into the bin through the vent opening.

- Sukup Anchor Brackets - Sukup anchor brackets are 22" high, extending above the plenum area to serve as a stiffener. This reduces the stresses on the sidewall sheets at the bottom ring caused by vertical loads. This L-shaped design transfers the vertical load directly to the concrete foundation below, while also preventing vertical and horizontal movement.

- Sukup Bin Doors - Sukup offers two bin door designs, one is 66", and the other 44" for bins with 8 rings or more. Both doors are made of heavy gauge galvanized steel and feature reversible hinges, allowing the door to open left or right. The top and bottom latches are designed for one handed use. The Sukup inner bin doors are designed to swing open a full 180 degrees and rest flat on the sidewall, are adjustable to allow you to maintain a good seal, and feature patent pending Hammer Head latches.

- Sukup Bin Step - The Sukup bin step is heavy gauge galvanized steel with a special non slip surface that will not hold water.

- Sukup Ladders and Roof Rungs - All Sukup bins have eave-to-peak roof ladder rungs, which feature a rounded design, eliminating sharp edges. The perimeter of the fill hole has steps for extra safety. Landing platforms, stairs, inside and outside ladders, and ladder cages are all available options.

Learn about the types of Sukup Grain Storage Bins we carry

We offer grain storage and handling, service, and parts in Indiana, Ohio, New York and Pennsylvania. 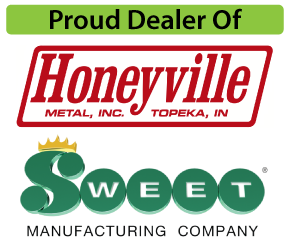 We work with all the top brands in the industry, including Sukup, Hutchinson, Sweet Manufacturing, Honeyville, Baldor Motors, Screw Conveyor Corp, and RMS Rollergrider.